Blog: Calgarians are in for a ride as RiverWalk Phase III Opens

Calgarians are in for a ride as RiverWalk Phase III Opens 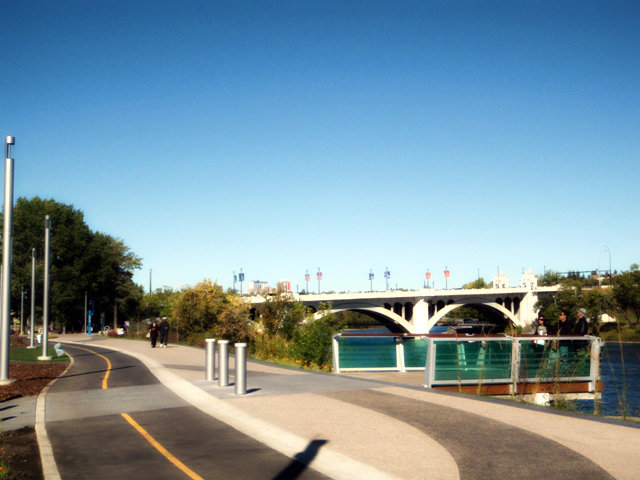 Looking for the perfect place to relax those muscles and to have your daily dose of exercise? Visit RiverWalk!

Athletes, health buffs and Calgary citizens alike can now better enjoy their regular recreational activities along Riverwalk as it opens phase III of the Bow River pathway. The much awaited expansion of this favorite recreational spot will definitely bring an influx of civilians as it now stretches two kilometres along the Bow River from Centre Street Bridge cutting through East Village and around Fort Calgary to 9 Ave. SE.

The EV master developer of Calgary Municipal Land Corporation (CMLC) proudly announced Phase III’s opening which amounts to 423 linear meters of pathway including a gateway plaza situated near 9th Avenue SE, a small area area by the rivers conflux and two step down decks, as described in evexperience.com’s announcement

Evexperience describes RiverWalk Phase III as having separate delineated paths for cyclists and pedestrians with a divided commuter bikeway and a pedestrian pathway which reflect the same surfaces as previous phases. The difference is the relaxed pedestrian route with noticeably less crossings and obstacles and more such as native and
ornamental grasses. Red cube styled seating adorn the path, a tribute to Fort Calgary founders, the North West Mounted Police. Since safety is a dominant aspect of the design and the master plan, a significant amount of focus is devoted to the lighting in this phase. Simple yet classy silver poles will adorn the path with its red cube seats illuminated creating an appealing visual night ime effect.

Michael Brown, the President and CEO of Calgary Municipal Land Corporation proudly pointed out the they are halfway through the finish line as the four-kilometer long pathway ties together the neighbourhoods from Centre Street to Lindsey Park.

If you’re looking for the perfect place to go to, stop by RiverWalk and enjoy a night time stroll or a relaxing bike ride along the city. The photo shows RiverWalks initial opening back in 2011. Visit the RiverWalk to notice the difference and the impovement.

This entry was posted on October 16th, 2012 by Josh Nelson | Posted in General

Calgarians are in for a ride as RiverWalk Phase III Opens